Next up is a pattern for all you Tencel fans!

‘Love you forever’ is a wonderfully sweet and deceptively simple pattern, designed as a perfect accompaniment for Flora Fibres Yarn Tencel yarn. The repeating heart lace pattern is only 12 rows long, making it suitable for most abilities from confident beginners onwards, and all stitches used in the pattern are fully explained.

The incredibly soft and silky feeling Tencel yarn makes this scarf feel delightful to the touch, while the breathable fibres will help keep you cosy but not overheated. The finished scarf also drapes beautifully, so it is sure to become a wardrobe favourite. Wear it out and about to keep you cosy, or wear it all day as a fabulous addition to your outfit! 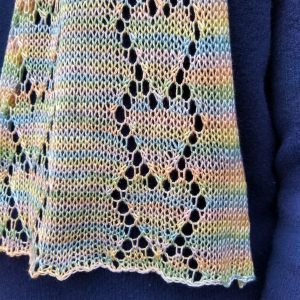 Same as with Lovers Lattice, this is a free pattern to provide you with some inspiration for what to use the lovely Tencel yarn for. And if you make one please do tag me, I’d love to see!

The next fibre I’d like to introduce you to is tencel!

This amazing fibre is definitely one you should try out if you haven’t already. It has the most incredible lustre and shine, and when dyed it takes on the colour incredibly well to give truly beautiful results. Yarns made from tencel fibres are also smooth, soft and strong, making them delightful to work with. The company who produce Tencel, Lenzing AG, say “(tencel is) more absorbent than cotton, softer than silk and cooler than linen.”

Tencel is actually a brand name for a fibre also called lyocell, which is regenerated from cellulose extracted from wood pulp. The wood used for the purpose is eucalyptus, which is sustainably grown on farms in Europe, on land which is unsuitable for agriculture. It therefore does not compete for space with crops, unlike cotton. It also uses 10-20% less water to produce than cotton. The farms which grow the trees have been awarded FSC certification to show they are environmentally and socially responsible.

The fibres are then extracted from the wood pulp using non-toxic chemicals in an almost 100% closed loop system, which means almost everything used in the process is recaptured and does not leak out to pollute surrounding land and waterways. And the fibres are naturally white so no bleach is used in the process to whiten them. Over 100 patents have been awarded to the company for the fibre extraction process, showing how important technology is in the production of eco-friendly fibres! The process is so good that the company has been awarded the “European Award for the Environment” from the European Union. Quite the achievement!

So now that you feel good about choosing tencel for its environmental qualities, what’s in it for you? Well, there’s lots to love about this fibre!

As it is so incredibly absorbant it makes an excellent choice to wear next to the skin, especially in summer when it gets hot and you start to *ahem* sorry, glow! We ladies glow, don’t we 😉 The fibres draw the moisture away from the skin, keeping you cool and also preventing bacterial growth. The incredibly smooth surface of the fibres are so soft they are ideal for anyone with sensitive skin. Unlike wool for example which is covered in tiny barbs, the tencel fibres are so smooth they won’t irritate the skin.

Tencel fibres respond incredibly well to natural dyes, taking on beautifully deep colours, which look incredible when paired with the incredible lustre of the fibres. See an example here of some blue yarn (dyed with black beans), which has already been spun, and some yellow (gorse) and green (gorse then black beans) fibres which I’ll be spinning soon:

Have you tried tencel yet? If you are now excited to try some for yourself, you can check out my current stock of tencel yarn here.

(TENCEL® is a trademark of Lenzing AG)

Looking for something in particular?